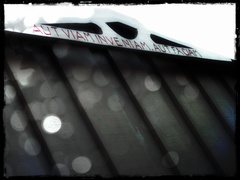 A 200 year old house, guesthouse, workshop, studio, garden and home in the rural heart of Portugal.
Respectfully restored and inhabited by a creative and hospitable couple that invites you to come along,
become friends and enjoy the vicinity of Alqueidão. Yes you can only visit as friends, they're not business-like people.
At Triple Chaos they build out of the box musical instruments. Cigar Box Guitars, Stomp-boxes and well, any music
(or noise) making tool that doesn't fit in the accepted categories of "serious" instruments.
The 'Not Just Sawdust' workshop and the 'Bluesbarn Studio' seemed a perfect combination to explore the low-budget
field of instrument making.

She went to art school, became a graphic designer and worked over 25 years for the Royal Dutch Telephone Company. He was a successful frame-maker, winner of the Art & Frame Award, art dealer and picture frame restorer for multiple museums and was partner in a creative company called Xchaos. She owned a booking agency called Bluesbarn Promotions, he worked as an engineer at the Bluesbarn Studio. Next to being involved in all kinds of art and creative projects, they also worked at an auction house, and yes, all that at the same time. Life was a rat-race, private time was rare and therefor they decided that is was time for a change. In 2007 he sold his workshop, she said goodbye to her colleges and after traveling a bit thru Canada, Turkey, France and The Gambia they finally ended up buying a 200 year old derelict cottage on a hill in a little village called Alqueidão, right in the middle of the rural vicinity of Portugal. Restoring the property and the ruin next to it took over 6 years and when all that was coming to a completion, time came to let the creativity come to life again. No, not the rat-race style, no stress related appointments, no clock, no time. Adjusting to a "slower" and simpler life was easier than predicted. It doesn't have to be that dream that's gone every morning you wake up. They did it, You can do it.
Aut Viam Inveniam, Aut Faciam - There's always a road, if not, we'll make one.